A “flying” electric river taxi hailed by its creators as the future of clean city transport is being put through a battery of tests in Paris this week, with a view to being in service by the spring.

Named the “Sea Bubble”, the white aerodynamic craft skimmed over the River Seine at speeds of up to 30 km/hour (17 m/hour), hovering 50 centimetres (1.5 feet) above the water.

A journey from the Eiffel Tower in the west to Notre-Dame cathedral in the bubble takes just minutes, as the craft zips past the traffic snarled along the banks of the river. 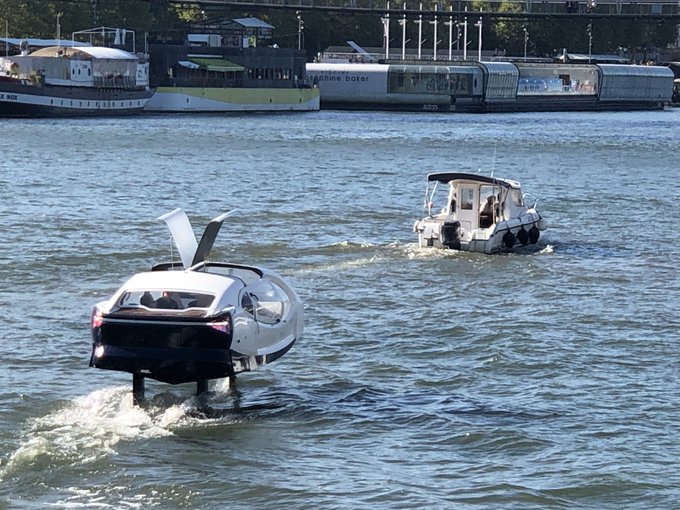 Back to the future

The taxi, which looks like a nautical version of the DeLorean car in the 80s sci-fi film “Back To The Future”, is the brainchild of French yachtsman Alain Thebault.

It makes no noise and no waves and also emits no CO2, winning the approval of French transport officials looking to endow the capital with new clean transport options in the run-up to the 2024 Olympic Games in Paris.

The Bubble is similar to a hydrofoil, with fiberglass foils that deploy to hoist its hull into the air when it reaches a certain speed, powered by electric batteries.

A first prototype, for four passengers, was first tested on the Seine in June 2017, with mayor Anne Hidalgo taking a spin.

The craft’s operators say they have been inundated with requests for the taxis from cities including Geneva, Miami and Saint-Tropez.

In Paris, it has struck up a partnership with a tour operator offering luxury tours on the Seine.

“All the signals seem to be turning green for the start of commercial operations of our Bubble Taxis in the first three months of 2020,” said Sea Bubbles’ CEO and Swedish champion windsurfer Anders Bringdal.

The taxi’s mission he said was to “put the Seine back at the centre of mobility in the greater Paris area while respecting the “zero noise, zero waves, zero CO2 emissions” principle.