The victory brings Misbah-led team on top of PSL points table and also sealed a play-off spot for the one time trophy winner.

Kieron Pollard’s quick 73 off 47 could not save Multan Sultans as they lost all their top batsmen in the first ten overs with Pollard as their only saviour. 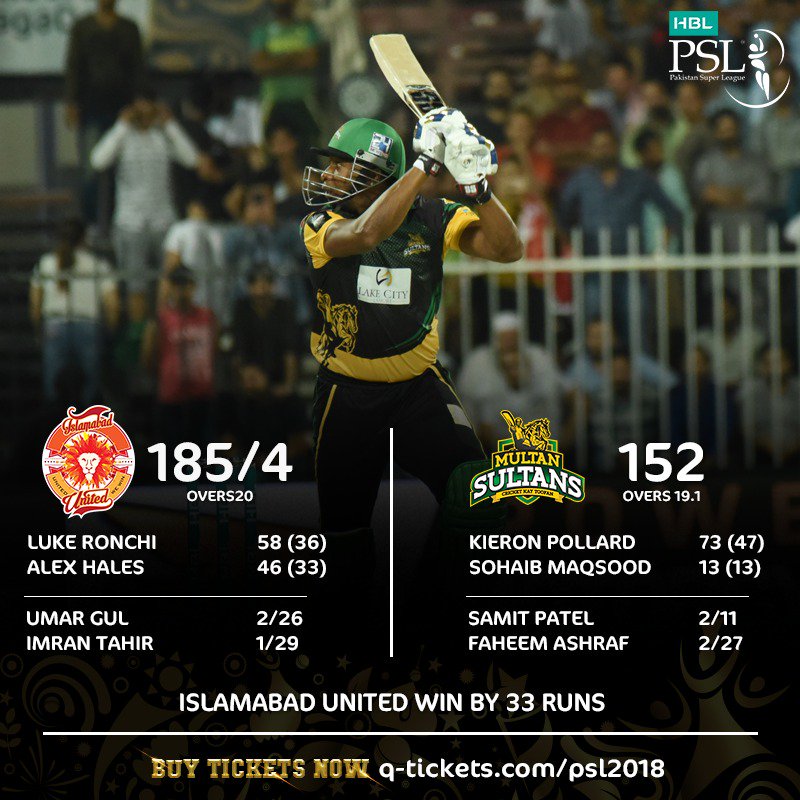 The West Indian played a memorable knock and took all the Islamabad bowlers to cleaners by hitting 6 sixes and five fours.

Ronchi played aggressively from the very first ball smashing three sixes and six boundaries in his 36 ball-58 as he opened the innings with JP Duminy as Islamabad were put into bat first.

Duminy could add just six runs to his account before he got run out.

It was hales who joined Ronchi when Multan got their first breakthrough on 46, both together put decent partnership of 45 runs on second wicket before Ronchi was bowled off Tahir’s sharply spun delivery.

Hussain Talat once again proved as a cemented wall for his team as he struck 36 runs at crucial stage.

Asif Ali and Faheem Ashraf remained not out on 17 and 13 runs respectively.

United’s victory sealed the PSL play-off spot for them while Multan Sultans can pray that Peshawar lose one of their two matches so that they can qualify as last four.

Doctors call for cancellation of Olympic Games due to COVID-19