Was Mugabe’s body wrapped in an Adidas body bag?

An image showing what appears to be an Adidas-branded body bag, supposedly containing the remains of the late Zimbabwean president Robert Mugabe, has been shared hundreds of times on social media.

However, the body bag isn’t real — it’s a computer-generated image that was created by a German design company, with no connection to Mugabe.

Adidas confirmed that they don’t produce body bags, and that they have had no commercial relationship with either the current Zimbabwe government or the previous one led by Mugabe.

The Zimbabwean guerilla hero turned despot died on September 6, 2019, at a hospital in Singapore where he had been receiving treatment since April.

Various Facebook posts and tweets have shared the Adidas photo alongside captions suggesting that Mugabe was opulent even in death.

Here is the screenshot of a tweet which was retweeted over 200 times and attracted more than 600 comments and reactions. Kenyan blogger Cyprian Nyakundi, who has more than 25,000 Twitter followers, shared the same picture alongside another one of Mugabe wearing an Adidas tracksuit, and captioned it: “Robert Mugabe loved Adidas they had to put him on Adidas body bag. Lanes please, Mugabe knew class.” 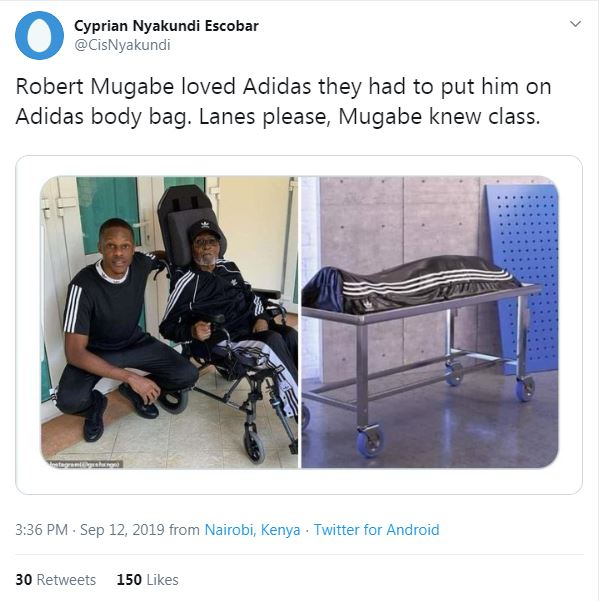 However, a reverse image search on Google traced the picture to a website for shoe lovers, Sneakerbox, under a blog-post category called “Gone in Style”.

The image appears here alongside two others showing glitzy death-related products — a Nike-branded coffin and a Gucci urn for ashes.

On the Instagram account, we found the body bag picture uploaded on April 8, 2019 — almost five months before Mugabe’s death. The Nike coffin and Gucci urn were posted the same week.

OREAL, which is based in the German city of Trier, describes itself as a ‘non-award-winning design studio with a creative focus on illustration, animation and art direction’.

The company’s assistant Annika Kadner confirmed in an email that the body bag image “is a creation of the studio made in April 2019”.

Roman Möhlinger, media relations officer at Adidas, also confirmed that the sportswear brand does not make any product of this kind.

“Adidas does not produce body bags. Also, we don’t have/had commercial relationships with the Mugabe regime or the current Zimbabwe government,” Möhlinger said in an email.

Mugabe’s death has been a source of fascination online, and the body bag picture is not the only misleading content relating to his demise.

Little girl seemingly sinking into ground – can you solve the illusion?