Invasive ‘murder hornets’ found in US for first time

Hundreds of Asian giant hornets, an invasive, predatory insect dubbed the “murder hornet,” have found in Washington state near the Canadian border.

The Asian giant or ‘murder’ hornet can grow up to two inches long with a sting that delivers a potent neurotoxin.

According to the Washington state Department of Agriculture, aside from the danger to humans, the Murder Hornet presents a danger to agriculture and the apiary industry. The insect is known to attack honey bees, with a few of the hornets capable of wiping out an entire hive in hours.

‘They´re like something out of a monster cartoon with this huge yellow-orange face,’ said Susan Cobey, a bee breeder at Washington State University

Scientists in the US are preparing to try to eradicate the hornets before they wipe out US bees. The WSU scientists will begin trapping queen murder hornets this spring, aiming to detect and eradicate the species. 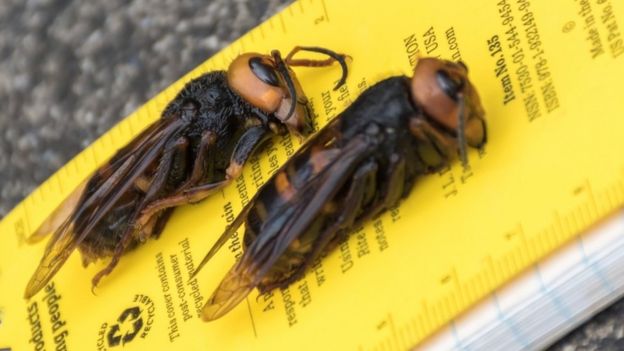 Scientists don’t know for sure how the Murder Hornet made its way to Blaine. The most likely scenario is that it arrived on a container ship docking at one of Washington’s ports.

The hornet was sighted for the first time in the U.S. last December, when the state Department of Agriculture verified two reports near Blaine, Washington, close to the Canadian border. It also received two probable, but unconfirmed reports from sites in Custer, Washington, south of Blaine.

Murder hornets have been known to kill roughly 30 to 40 people each year in Japan.

US sets record for new COVID cases third day in a row at over 69,000

Coronavirus: How far a droplet can travel?