The video captured at the Guitar, Amplifiers and Keyboard (GAK) shop in England revealed two guitars shaking on the shelves without an apparent outside interference.

One of the clips, filmed in the early hours on June 5, a price tag can be observed being ripped off from a Fender guitar and thrown to the ground by an invisible entity. 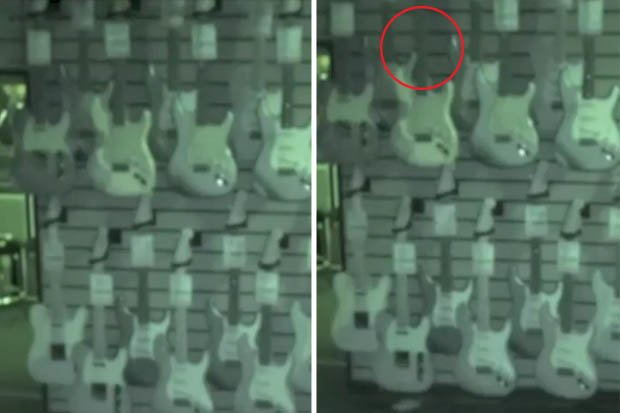 Videographer Mark Batch, who works at the shop, said that the security cameras in it were triggered by movement.

“Our motion sensors went off in the shop, encouraging us to check CCTV footage,” he said.

The staff think it’s odd and creepy but it hasn’t affected anyone as of yet, he added.

“Some say it could be the guitars re-adjusting themselves after they were hanged incorrectly, but there is no wind there and it’s not near any draft or ventilation so there aren’t many suggestions,” maintained Mark.

This isn’t the first time when such paranormal activity has been caught on camera in the same store, on May 3, a customer was filmed being approached by what has been called, a phantom.

“There is the occasional thing that happens, stuff falling over etc, but nothing concrete,” said Mark.

“We will be keeping our eyes peeled for anything out of the ordinary moving onwards.”

Such instances have become a staple in the vicinity where several such sightings and incidents have been reported by many residents of the area.

The video clip has gone viral on the internet and made for interesting commentary where some admired the ghost for its taste in musical instruments while others were visibly petrified.

One person said: “That’s one cool ghost. Any ghost who loves guitar is a friend of mine. Must’ve been a massive gear head.”

Another commented: “That’s crazy man, I mean if that’s for real you should call someone to investigate it.”

A third suggested the shop must “sell the guitar used at a reduced price”.