LAHORE: Title holders Peshawar Zalmi edged out Quetta Gladiators by a mere one run in a sensational last ball finish to win the first eliminator of the Pakistan Super League at Gaddafi stadium Lahore on Sunday.

Needing a tough 25 runs to win in the last over Quetta allrounder Anwar Ali smahsed a boundary and three sixes to bring down the task to three off the last delivery but saw his lofted shot dropped at long-on but the fielder threw the ball to the non-striker end to get Mir Hamza run out to spark jubiliation in Peshawar’s camp.

Peshawar was in control until the last over but in the end kept their winning record in Lahore against Quetta intact in a repeat of last year’s final which they won by 58 runs.

But both Mohammad Nawaz (35) and Sarfraz Ahmed (35) fell off successive Sameen over to leave Quetta to derail the twice runners-up. Nawaz hoisted one to deep third man after his 32-ball knock which had five boundaries and a six. next ball, Sarfraz miscued a hook and was caught behind. He hit two sixes and three boundaries in his 21-ball innings. 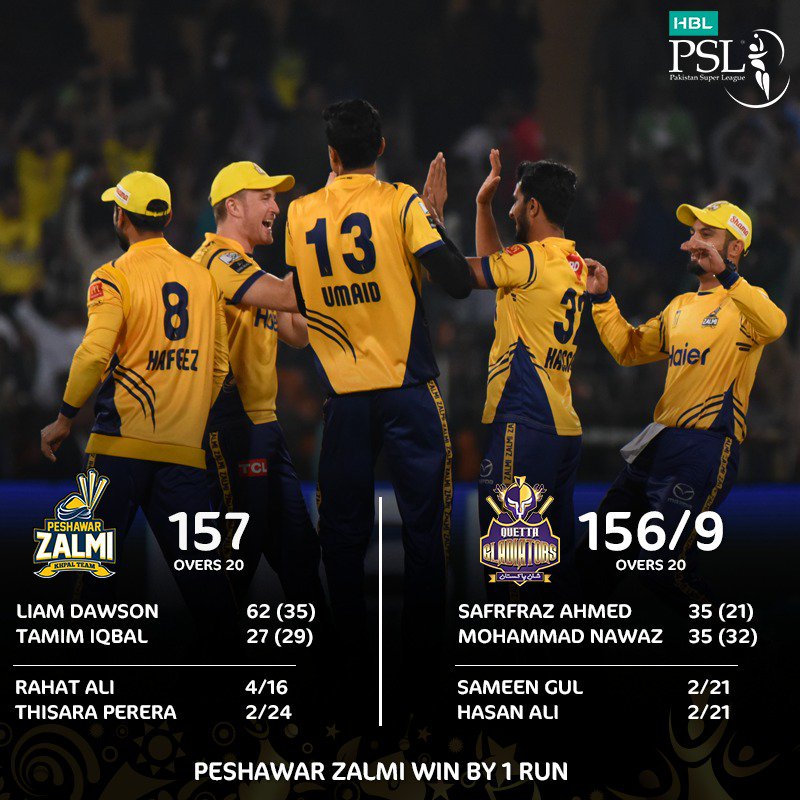 Peshawar continued to check the run-rate as Mahmudullah Riyadh (19) Rilee Rossouw (8) and Thisara Perera (12) fell under the pressure of soaring required run rate.

Dawson held the innings as Peshawar added 46 in the last five overs. He built small partnerships and whenever he had the opportunity hit a boundary. He changed the tempo of the innings with two sixes and four while taking 21 in the 17th over bowled by Thisara Perera. His first six helped him reach fifty off just 29 balls.

Tamim Iqbal, celebrating his birthday, hit five boundaies in his29-ball 27 while Mohammad Hafeez smacked four boundaries and a six in his14-ball 25. The two added 44 for the third wicket after Peshawar lost two early wickets if Kamran Akmal (nought) and Andre Fletcher for one.

Rahat was the pick of the bowlers, dismissing Kamran, Dawson, Umaid Asif and Darren Sammy in an inspired spell of bowling.

Zalmi will now face Karachi Kings in the second eliminator in Lahore on Wednesday. Islamabad United have already qualified for March 25 final in Karachi.