SHARJAH: Kamran Akmal smashed a brilliant undefeated century to help Peshawar Zalmi qualify for the play-offs with a commanding seven wicket victory over Lahore Qalandars in Sharjah on Friday.

Kamran’s 61-ball 107 not out not only entertained a packed Sharjah stadium but also helped Peshawar Zalmi to overhaul the huge 173-run target in 18 overs.

Kamran, who was player of the tournament last year with 353 runs, alongwith opener Rikki Wessels smashed 19 runs in the first Devcich over to set Peshawar’s chase and continued in the ruthless style. He reached his fifty with a six off Bilal Asif off 38 balls.

Kamran once again proved his mettle by smashing the ball outstandingly around the whole park including 11 boundaries and seven sixes in his account.

Meanwhile he became the first batsman to hit two centuries in PSL including the Last year’s 104 runs knock against Karachi Kings. 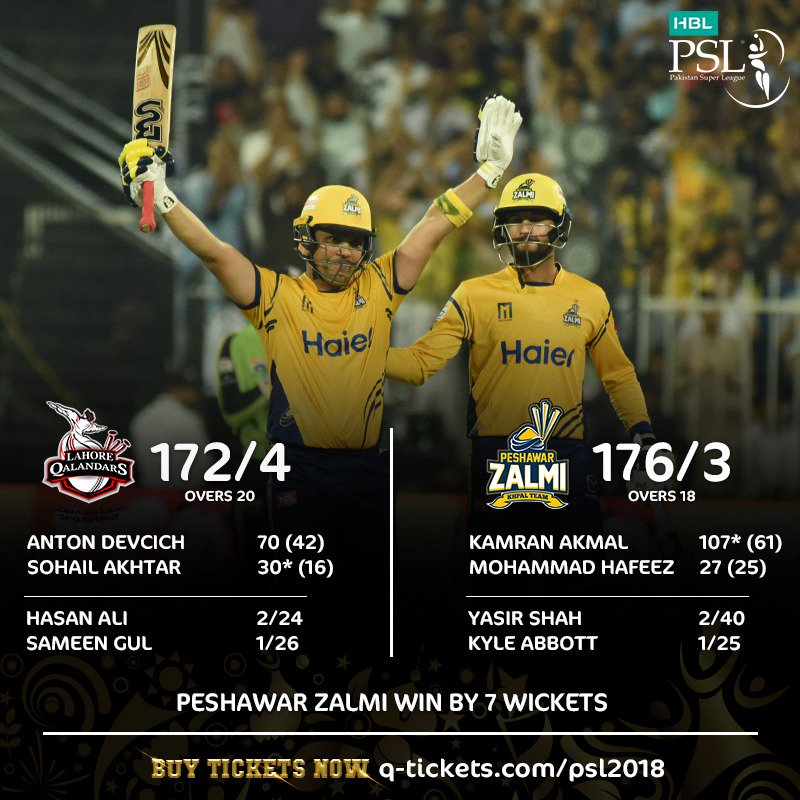 Earlier, Lahore started their innings with openers Fakhar Zaman and Anton Devcich as they decided to bat first after winning the toss.

Devcich held on end intact as he saw Fakhar (6) and skipper McCullum (7) lose wickets, but the left-hander kept his nerves calm and played sensible knock including two boundaries and seven sixes.

Young Agha Salman (28) in middle overs supported Devcich and both put together a steady 55 runs partnership which strengthen the position of Lahore in their last match of the tournament.

In the end Lahore were rescued by Sohail Akhtar (30) and Gulraiz Sadaf (26), both added 53 runs on fifth wicket.

In reply Peshawar started their innings with new opening pair of Kamran Akmal and Rikki Wessels.

Meanwhile Kamran hit 20 runs in the first over which made it clear that they were in a mood to thrash the bowling attack of Lahore from the very start.

Muhammad Hafeez added 27 runs to the score board.

Saad Nasim remained not out making 17 off eight balls.

Kamran Akmal was given the ‘Man of the Match’ award.

Zalmi finished the round robin league with ten points and better net run rate than Quetta and are placed second until Karachi’s game against Islamabad.