NASHVILLE: Staff at a US restaurant had an unexpected surprise when a tourist left a massive tip after his inexpensive meal at the Burg Steakhouse in Gatlinburg, Tennessee as he left a $1000USD (Rs153,200) for the staffers other than his bill.

He also paid for the meals at two other tables as well as his own.

There was unfortunately a sad twist when it came to the man’s kind gesture. 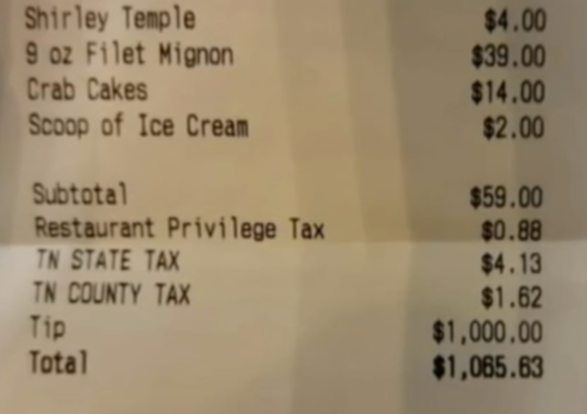 Steakhouse staff later learned the man is sick and only has a few months left to live, wishing to remain anonymous to those he helped out.

The man is said to have been using his last months of life to pay it forward.

His only request? The company had to give every employee a piece of the thousand dollars.

Staff at a US restaurant had an unexpected surprise when a tourist left a massive tip after his meal.

According to the local news outlet, the money was split between all members of staff, which resulted in them taking around $40 each.

The head server at the restaurant called the man’s actions humbling.

“It was a humbling moment,” they told the media.

“I’m just wanting to thank him.

“Like, all I’m wanting to do is go up to him and give him a hug and tell him ‘thank you.’