Economic repercussions of floods in Pakistan

The news that the FBR has exceeded its tax collection target has not received due recognition in the wake of the disastrous floods causing havoc across the country.

It is widely reported that the flash floods might impact Pakistan’s economic outlook and it may take the country back by many years. The scale of devastation has unnerved the Pakistani nation with the government earnestly appealing for international help to mitigate the prevailing situation.

It is quite obvious that the floods will certainly impact the economic outlook and may be difficult to overcome. To begin with the floods have reduced the potential output of both main and minor Kharif crops, thereby tampering with positive outlook of the agriculture sector
that will ultimately cause a negative impact on the economy.

By the look of it many reports suggest that it was unlikely that major international financial assistance will come Pakistan’s way due to the prevailing global situation and their commitments to Ukraine.

This is the reason that the international response was muted though the World Bank may repurpose its existing $370 million for the flood-related activities and the Asian Development Bank (ADB) is expected to re-prioritise its $25 million funds, including an $8 million grant that was earlier committed for Covid-19 purposes.

In addition most bilateral donors have indicated considerably small amounts that are considered singularly insufficient for the financial provisions required to come to grip with the scale of disaster. One example of this lukewarm attitude is that the combined grant indications by China, the United States and the European Union may be a few million dollars that is paltry, to say the least.

The economy that was already known to be witnessing a slowdown in June and July is also reported to be going through high inflationary and external sector pressures due to higher commodity prices both in the international and domestic markets and exchange rate depreciation.

The potential of economic stability is highly doubtful as all indicators point out towards an impending stagflation that may further reduce the development of economy. 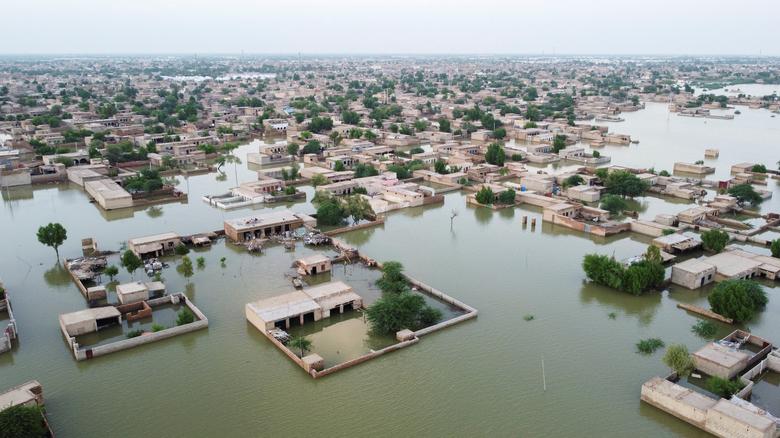 It is quite a setback for an already under-stress economy that may prove very difficult to revitalise. The official circles have clearly predicted that inflation would stay high in August at the level witnessed in the previous month.

In July, the inflation surged to 25%. Year-on-year inflation will settle at nearly the same level as the one observed in July 2022 and this certainly is a negative prospect.

Despite the pressures exerted by the floods, the FBR has kept well on its track and has exceeded its tax target by collecting over Rs.948 billion in the first two months of current fiscal year amid the challenge of maintaining the momentum as imports and economic activities are slowing down in the aftermath of the devastating floods.

It is reported that against the July-August target of Rs.926 billion, the FBR collected Rs.948 billion, surpassing the target by Rs.22 billion.

The additional tax receipts may help the FBR to achieve the new month’s target, which is relatively higher.

Compared to the same period of last fiscal year, the tax collection was higher by nearly 10%, or Rs.83 billion and this pace was registered significantly lower than the prevailing inflation rate of 25%.

It is pointed out that FBR needs to collect Rs.7.470 trillion in the current fiscal year and this collection target would require 21% growth over taxes received in the previous fiscal year.

For August, the revenue board had set a target of Rs.483 billion, which it surpassed by a slight margin on the back of nearly 9% growth.

It is however reported that the FBR is experiencing difficulties in collection of customs duty, which in the past remained a cornerstone of the FBR’s performance, as it remained below the target for the second consecutive month.

Economic activities in the country have been temporarily affected by the floods, which will dent the FBR’s tax receipts under various categories.

The country may see a pickup in imports in the coming months but a significant chunk of the imports could be free of duties and taxes.

It must be kept in view that in 2022-23 budget the government has imposed over Rs.1 trillion in additional taxes on account of petroleum levy, income tax, sales tax and federal excise duty. The provisional collection figures showed that the FBR collected Rs.343 billion in income tax, up Rs.83 billion, or 31%. The collection was equal to 36% of the total taxes received in the first two months of FY23.

The FBR improved the two-month income tax target by Rs.27 billion. Of the Rs.948 billion total tax collection in July and August, the FBR generated taxes of Rs.486 billion at the import stage in terms of withholding taxes, sales tax on imports and customs duty. Its share came
in at around 51%, picking up pace again after slowing down in July.

Sales tax collection at the import stage stood at Rs.285 billion which was Rs.7 billion more than last year’s collection.

Federal excise duty collection stood at nearly Rs.51 billion, up Rs.5 billion, or 11%. It exceeded the target by Rs.10 billion. However, the customs duty collection has created problems for the taxation authorities as it stood at Rs.149 billion – Rs.14 billion short of target. It was also Rs.6 billion less than the previous fiscal year. A key reason was the reduction in imports, which the government was containing to reduce the current account deficit.

In another development the incumbent government is examining the prospects of seeking an emergency loan from the IMF as it is estimated that devastation caused by the floods could run well up to Rs.2.5 trillion setting back the growth rate and pushing it back to just 2 percent. This is a very worrying spectre.

The supply chain disruptions and resettlement of flood-affectees could push the inflation rate up to 26%, a level that is far higher than the State Bank of Pakistan and the IMF’s pre-flood projections of 18% to 20%.

Moreover, it is reported that the agriculture sector growth may shrink 1.8% as against the pre-flood target of 3.9%. The major hit is coming from the important crops’ side, which will see a contraction of 18% over the growth rate of the previous fiscal year.

The growth in the livestock sector is also estimated at only 2% as against the original target of 3.7% and over 800,000 animals died due to the floods.

The output of cotton, rice and maize crops is severely affected from the flood and it is also feared that the sowing of sugarcane and wheat will also take a hit.

The wheat output might remain at 25.1 million tons compared to the target of 26.3 million tons. The growth rate in the industrial sector could slow down to 2.8% instead of its target of 5.8%.

Audio leaks issue to be investigated...

Find the hidden horse within five...