ISLAMABAD: The whole nation is observing Kashmir Hour today (Friday) to express solidarity with the oppressed people of Indian Occupied Jammu and Kashmir.

The Kashmir Solidarity Hour commenced from 12:00, which will last till 12:30 hours. The hour started with sirens sound all across the country and national anthem of Pakistan was played followed by the national anthem of Azad Jammu and Kashmir.

All people and traffic stood still as the national anthems were played.

Read More: Will fight for Kashmir at all forums till it’s freedom: PM Imran Khan

The prime minister and chief ministers along with all the parliamentarians lead the nation by coming in front of their respective Secretariats and office buildings whereas the masses remained out of their offices, houses, markets and malls, and gather in the nearby streets all over the country.

Prime Minister Imran Khan, who requested all Pakistanis to come out on Friday to send a message of solidarity, is leading the rally outside the PM Secretariat. 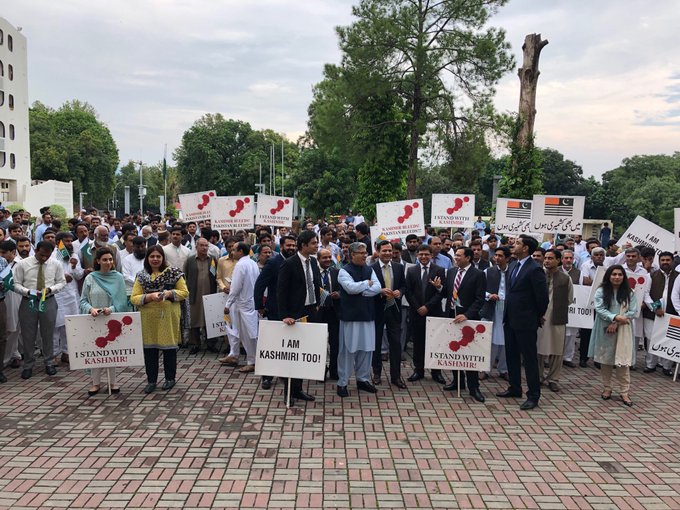 All the chief ministers and parliamentarians are also gathered outside the CM Secretariat buildings.

Addressing the rally, PM Imran said, “Our Kashmiris are going through a difficult phase. Approximately eight million Kashmiris for the last four weeks have been locked under curfew.”

He added that the purpose of ‘Kashmir Hour’ was to send a message from Pakistan that until Kashmiris get their freedom we [Pakistanis] would continue to stand with them. “We will stand with them till the last breath.”

Read More: Indian designs will end up balkanizing it into 22 Pakistan’s: Sheikh Rasheed

The prime minister further said it was important to understand the type of government in India which was oppressing people. “We need to understand the ideology of RSS [Rashtriya Swayamsevak Sangh]. This was a party which was motivated by hatred for Muslims. This party was inspired by Hitler’s Nazi party.”

“The entire world is watching what is happening in Kashmir. The world’s reaction would have been stronger if Kashmiris had not been Muslims,” he lamented.

“Till Kashmir is not independent, I will continue to fight for their freedom at every forum,” PM Imran asserted.

“I will raise the issue at the UN General Assembly. We saw the effect of Nazi Germany on the world and millions died in the second world war as a result of it,” the prime minister said. “If today the world does not stand against Modi’s fascist government, it will not stop here.”

After Jumma prayers, special prayers for the people of Indian occupied Kashmir were offered.

He added, “We know India wants to remove the world attention by doing a false flag operation like Balakot and will do something in Azad Jammu and Kashmir.”

Calling out the international community, PM Imran said, “I want to clearly give a message that we will reply to any Indian action. Our armed forces are ready for anything.”

“I keep telling the world and every international outlet that if they remain quiet about Kashmir issue and the atrocities in the valley, the entire world will suffer because of that,” he added.

He further added, “India didn’t let media go into Srinagar, this should tell the entire world exactly what sort of cruelty is being perpetrated there.”

“In the end, my heart is telling me that Narendra Modi, what he’s doing in IoK in his arrogance. He has played his last card. Kashmir will be free now,” the prime minister added.

President Arif Alvi while addressing a rally said if we all were united in our cause we could free Kashmir. “The government of Pakistan and people are standing with Kashmiris.”

“We will reply to Indian propaganda on every forum,” President Alvi said, adding that they will also observe solidarity next week as well.

President Dr. Arif Alvi has reiterated the nation’s resolve of supporting the people of Occupied Kashmir in their struggle for the right to self-determination.

Addressing a ceremony in connection with “Kashmir Hour” at Presidency in Islamabad on Friday, he said Kashmir is not just a piece of land for Pakistan but it’s a relationship of faith and humanity.

He said valley of occupied Kashmir is witnessing communication clampdown and Indian forces are committing the worst kind of human rights violations there.

He said over one hundred thousand Kashmiris have been martyred since 1948 even children have sacrificed for the freedom of Occupied Kashmir.

He said India has deputed extra troops in the occupied valley after the abrogation of article 370. He said no media is allowed to report from the occupied territory.

The President pointed out that Kashmir is an internationally recognized dispute and it is India which took to the UN Security Council.

Dr Arif Alvi warned the world that India is ruled by a fascist regime and nuclear assets of India are not secure in their hands. He said Pakistan desires a peaceful resolution of Kashmir dispute. However, he said Pakistan will respond befittingly to any misadventure by Modi’s government.

He said the only plebiscite can lead to a peaceful solution of the long-standing dispute.

He said India has nefarious designs against Pakistan and arrest of a serving Indian Navy commander Kulbhushan Jadhav is a testimony to the fact.

Referring to Pakistan and India stand-off in February this year, the President said India should not forget that Pakistan downed two of its fighter aircraft and captured one of its pilots. He said Pakistan, keeping alive the Islamic norms, returned the pilot as a peace gesture.

He urged the youth to work hard to strengthen Pakistan economically as strong Pakistan is important for freedom of Kashmir.

Earlier, Siren was blared at 12 noon and national anthems of Pakistan and Azad Jammu and Kashmir were played.

Children from different schools were also present on the occasion. They were carrying flags of Pakistan and Azad Kashmir and chanting slogans for freedom of Kashmir.

Prime Minister Imran Khan, during his televised address, had given a call to express solidarity with the people of Occupied Kashmir, who are bracing the worst kind of Indian atrocities and oppression.

Special Assistant to the Prime Minister on Information and Broadcasting Dr. Firdous Ashiq Awan says Modi is destroying world’s peace through committing the genocide of the innocent people of Occupied Kashmir.

Addressing a ceremony on Wednesday, she said the Indian Prime Minister has promoted hatred in the region by committing injustices and atrocities on the Kashmiri people.