The election body had reserved its verdict on Tuesday on the reference seeking disqualification of 25 dissident PTI MPAs of the Punjab Assembly. The reference against deviant members was filed by Speaker Punjab Assembly Chaudhry Pervaiz Elahi.

Read More: SC VERDICT ON ARTICLE 63 (A): ‘DEFECTING LAWMAKERS’ VOTES WILL NOT BE COUNTED’

The ECP decision comes days after SC’s decision on the interpretation of Article 63 (A), announcing that defective votes will not be counted.

The decision was made with a majority of 3-2, Justice Jamal Mandokhel and Justice Nazeer Alam dissented from the decision. The hearing of the case commenced on March 21 under a two-member bench, which was later increased to a larger bench by CJP Bandial.

Article 63(A) cannot be interpreted alone, other articles also need to be kept in context, said the Chief Justice in the verdict.

Punjab Chief Minister Hamza Shehbaz Sharif received a total of 197 votes for the CM election while 186 votes are required for a simple majority.

As these 25 lawmakers are no longer members of the House, Hamza has lost simple majority in the provincial assembly. He was sworn in as the 21st Chief Minister of Punjab on April 30 following Lahore High Court (LHC) order. 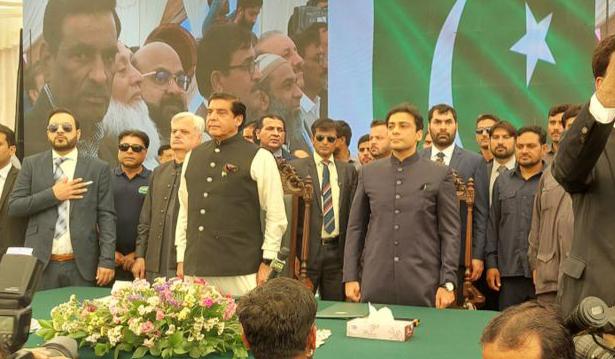 Hamza garnered 197 votes to beat Elahi — his rival, whose party PML-Q and ally PTI boycotted the election held on April 16.

Separately, the Lahore High Court (LHC) today issued notices to Hamza Shehbaz and others on separate petitions filed by the PTI and PML-Q requesting the court to declare his election as Punjab chief minister “illegal.”

MQM-P leaders to meet with...

Medical board formed to determine...

Pakistan moved away from default,...

Pakistan to import coal from...

Cryptoverse: Ether holds its breath for the lean, mean ‘merge’