Dubai: Bidding for most noble numbers kicks off May 1

Held in partnership with the Roads and Transport Authority in Dubai, Etisalat, and Emirates Auction, the auction will give bidders the opportunity to own the prestigious single-digit car plate, AA9, and three double-digit car plates: U31, T38, and E51.

Proceeds will go towards providing food parcels for disadvantaged individuals and families across 30 countries during the Holy Month of Ramadan.

Attendees to the auction, which will be held at Hilton Dubai Al Habtoor City, will include several philanthropists, high-profile personalities, and businessmen to support ‘100 Million Meals’ campaign’s aid efforts. 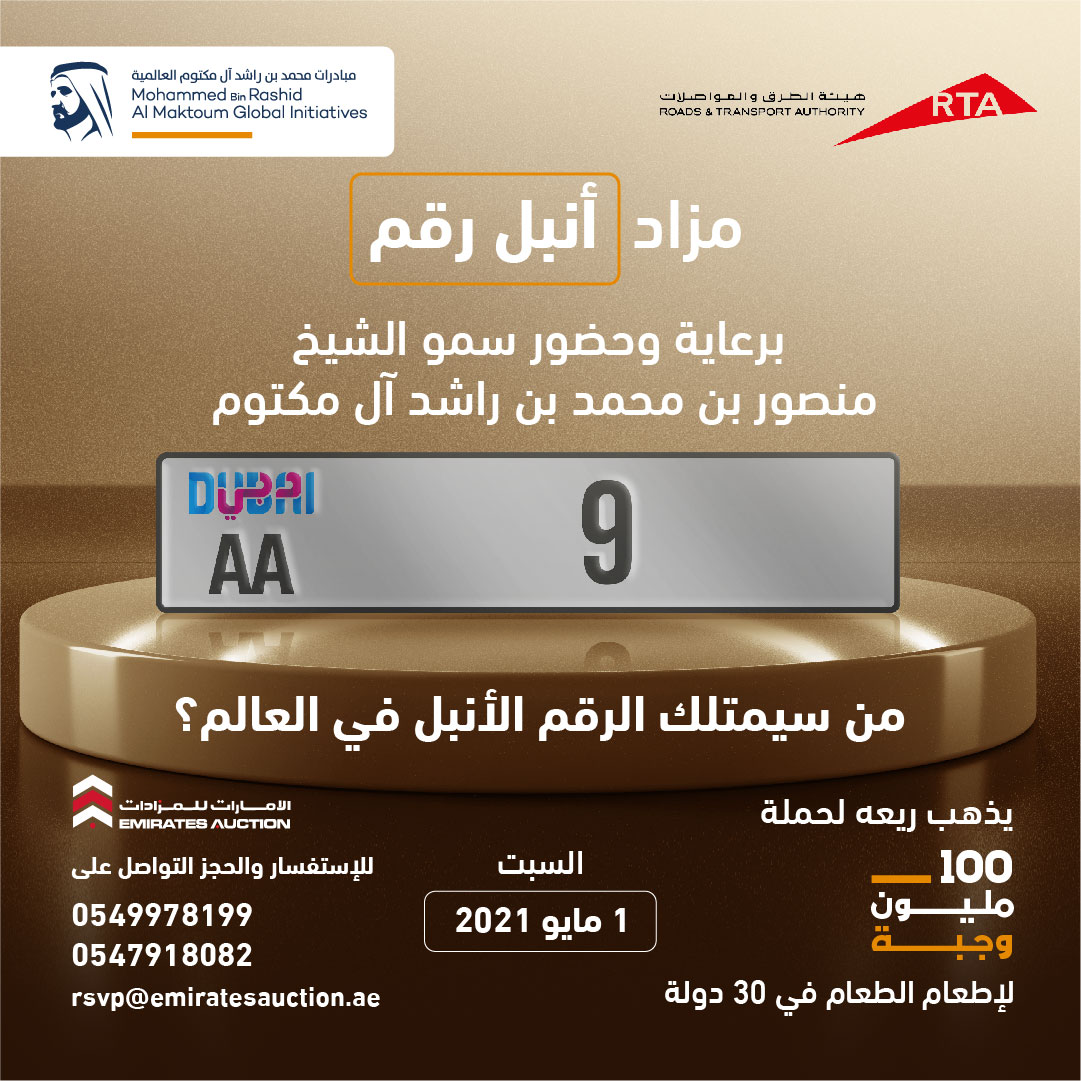 The ‘Most Noble Numbers’ is the second charity auction to be held by MBRGI to raise funds for the ‘100 Million Meals’ campaign. On Saturday, April 24, a charity art auction, which displayed rare and valuable masterpieces from world-renowned contemporary artists, raised AED36.6 million.

Rare artworks and masterpieces by world-renowned artists including Pablo Picasso, Henri Matisse, Salvador Dali and Joan Miro went under the hammer. Drawings by the late South African President Nelson Mandela were also sold at the auction.

Although ‘100 Million Meals’ campaign reached its target, raising AED100 million from 185,000 donors in just 10 days, the mission of giving continues.

The charity auctions are additional platforms to the four main donation channels available. Companies and the public can still donate through the campaign’s website www.100millionmeals.ae; by making a bank transfer to the designated bank account through Dubai Islamic Bank (AE08 0240 0015 2097 7815 201); by sending “Meal” on SMS to the specified UAE numbers (Du or Etisalat) listed on the website; or by contacting the campaign’s call center on the toll-free number 8004999.

Low-income families, orphans, widows and refugees in several countries started receiving food parcels that will enable them to prepare their own nutritious meals throughout the holy month of Ramadan.

MBRGI is coordinating with regional and local partners in beneficiary countries to ensure swift and efficient food distribution to reach the largest segments of people in need.

Food distribution is currently underway in Pakistan, Jordan, Egypt, Angola, Ghana and Uganda, with aims to reach 30 countries across the world. Besides contributing to global efforts to combat world hunger and malnutrition, the campaign aims to form a food safety net and provide a chance to a dignified life among poor populations.