Dubai recorded exceptional inflows of foreign direct investment (FDI) in 2020 with 455 projects worth AED24.7 billion, according to data from the Dubai FDI Monitor released by the Dubai Investment Development Agency (Dubai FDI), an agency of Dubai Economy.

An estimated 18,325 new jobs creation by inbound FDI in 2020, according to the Dubai FDI Monitor, which uses the Organization for Economic Cooperation and Development’s (OECD) methodology to track FDI data.

This performance places Dubai among the top global FDI locations in 2020, ranking first in the Middle East and North Africa (MENA) region and fourth globally in attracting greenfield FDI capital, according to the Financial Times’ fDi Markets, the leading global source of data on greenfield FDI.

The 455 FDI projects implemented in Dubai in 2020 exceed the annual average of 441 over the past five years, reaffirming Dubai’s strong FDI location fundamentals as well as its economic resilience, sectoral diversity, and FDI future-readiness.

Dubai continued to lead regional and global FDI locations in facilitating global business growth and expansion, ranking first in the MENA region and third globally in attracting greenfield FDI projects, according to fDi Markets. Dubai also achieved a record global market share in greenfield FDI projects, attracting 2.1% of all such projects in 2020, exceeding the 2% mark for the first time. 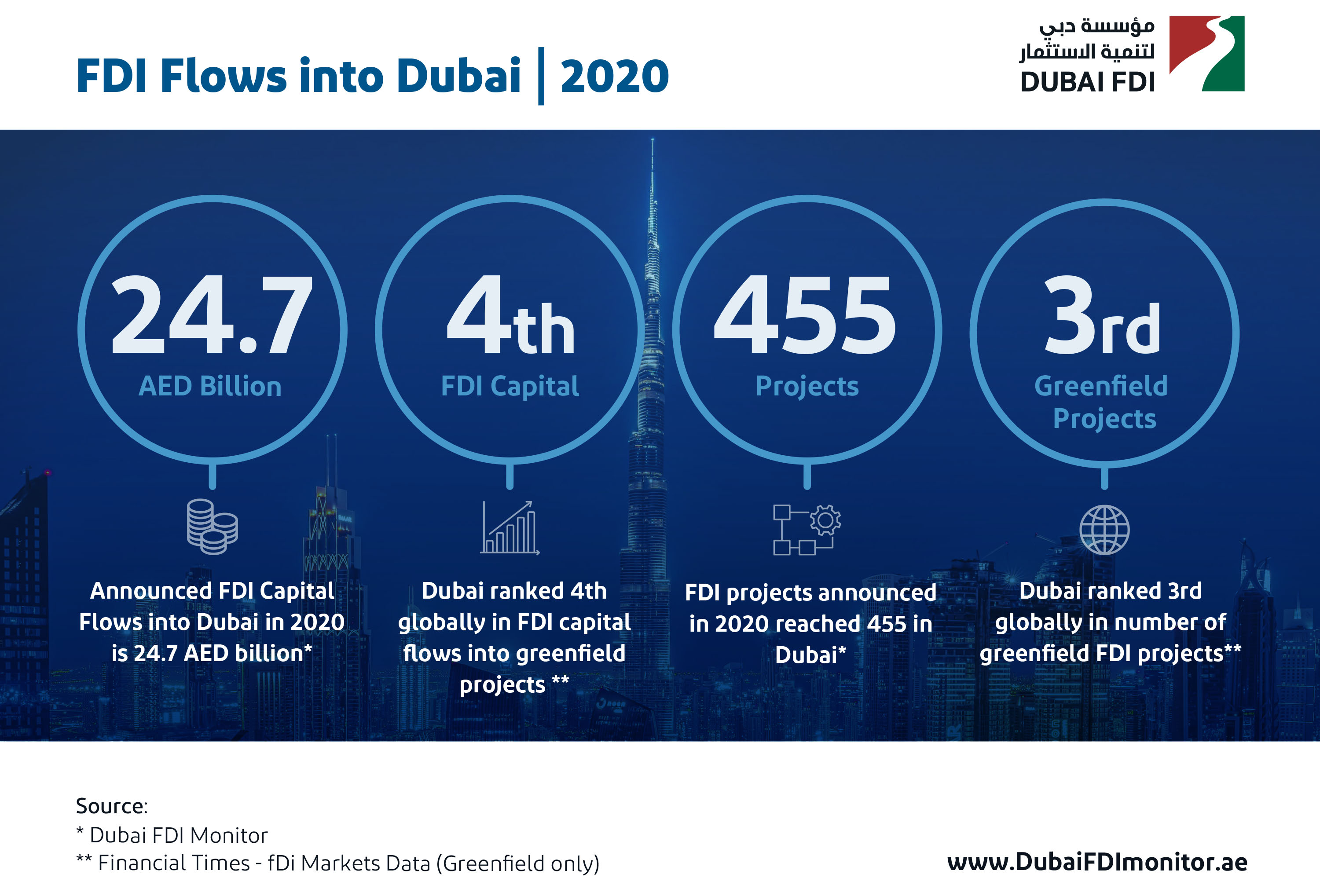 The “FDI Global Cities of the Future 2021/2022” report published by fDi Intelligence, a division of the Financial Times, in February 2021 ranks Dubai third among the top global FDI locations. Dubai is also ranked second globally in the ‘Major Cities for FDI’ subcategory as well as in ‘Economic Potential and Business-friendly Environment’. Dubai is third in the ‘Connectivity’ subcategory. These achievements highlight and further strengthen Dubai’s future-readiness and are a key indicator for future investor confidence.

HIGHLIGHTS OF DUBAI’S FDI PERFORMANCE IN 2020

Reinvestment FDI: FDI capital from reinvestment projects reached AED1.6 billion in 2020, exceeding the AED1 billion mark for the first time since 2016, as per data from Dubai FDI Monitor. Dubai ranked first in the MENA region in reinvestment FDI projects as well as capital, and fourth and 11th globally in the two categories respectively, according to fDi Markets.

Strategic sector FDI: The share of FDI projects in strategic sectors reached 57% of all announced FDI projects in Dubai in 2020, which further strengthens the foundation for Dubai’s sustainable economic development. These investments accounted for 91% of estimated FDI capital flows, reaching a record AED22.5 billion. The Dubai Government’s strategic plans and accelerated future-readiness have especially attracted strategic FDI into high and medium-tech sectors in 2020, as 76% of all strategic FDI projects in 2020 were high and medium-tech with a total of AED11.2 billion in estimated FDI capital.

Despite the challenges of the global pandemic in 2020, Dubai was able to strengthen its position as a global economic and financial hub. Taking advantage of Dubai’s strategic geographical location, thriving business ecosystem and quality of life, more multinational corporations established their regional headquarters in Dubai, creating new jobs and attracting global talent to live and work in the city. At the same time, regional and global startups considered Dubai’s infrastructure and connectivity to be the ideal combination to launch, test and expand their business.