KARACHI: The Karachi traffic police have issued a traffic plan in connection with the Pakistan Super League (PSL 6) first-leg matches to be played from February 20 to March 7 here at National Stadium Karachi, ARY News reported.

According to a plan issued by traffic police, the route from Hassan Square to National Stadium has been closed for all types of traffic. 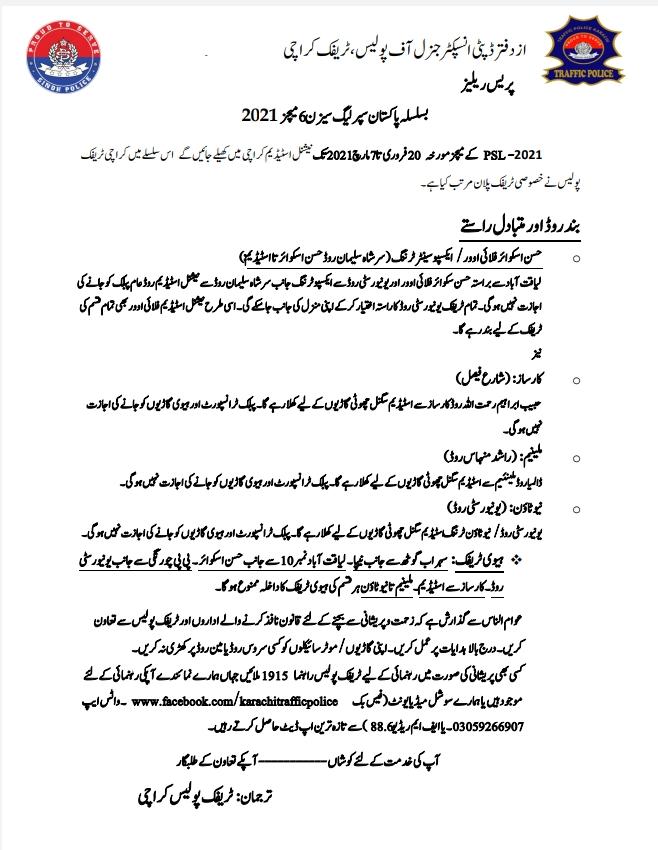 All kinds of small vehicles will be allowed to proceed on Habib Ibrahim Rehmatullah Road towards the stadium. Heavy/public transport will not be allowed.

Dalmia road will remain open for small vehicles from to Stadium Signal. Heavy/public transport will not be allowed.

The University Road/New Town turning will remain open for small vehicles towards the stadium signal. Heavy/public transport will not be allowed.

Heavy traffic will be diverted from Sohrab Goth to Nipa, Liaquatabad Number 10 and Hassan Square, whereas, it will be closed from PP Chowrangi to University Road; Karsaz to National Stadium; Millennium to New Town.

Traffic DIG Javed Ali Mahar instructed the police that no negligence will be tolerated.