Pompeo meeting: FM Qureshi says no ‘do more’ demand made from US

ISLAMABAD: Briefing media after a meeting with a US delegation led by Secretary of State Mike Pompeo, Foreign Minister Shah Mehmood Qureshi on Wednesday said that, contrary to what a section of media reported, the US delegation didn’t make any “do more” demand, ARY News reported.

The minister maintained that the meeting with the high-level US delegation was held in a “positive environment” and helped the two countries understand each other’s viewpoint over Afghan conflict, terrorism and other outstanding issues.

He added that the US Secretary of State invited him to Washington and he will also visit Afghanistan in his first tour as country’s foreign minister.

“The US approach towards the Afghan conflict has changed and now they want to get the Taliban and the Afghan government to reconcile,” said Qureshi.

He added that Prime Minister Imran Khan has been saying for years that there is no military solution to Afghan conflict and only way to resolve issues is through talks.

Qureshi also claimed that he didn’t mention the the cancellation of $300 million in American aid for he wanted to keep the negotiations focused on cooperation and resetting strained ties.

The foreign minister said that  during his visit to New York for UN General Assembly session, he will also call on the US Secretary of State to hold talks.

The US State Department’s statement

The US State Department, in its statement regarding the meetings in Pakistan, said that while meeting with Foreign Minister Shah Mehmood Qureshi, Secretary Pompeo discussed the potential for the United States and Pakistan to work together to advance joint priorities, including regional peace and stability. He also emphasized the value of strong people-to-people ties between our nations, built on decades of cultural and educational exchanges.

In all of his meetings, Secretary Pompeo emphasized the important role Pakistan could play in bringing about a negotiated peace in Afghanistan, and conveyed the need for Pakistan to take sustained and decisive measures against terrorists and militants threatening regional peace and stability.

Earlier, Foreign Office, in its statement regarding the meeting said that the foreign minister received the US Secretary of State Michael R. Pompeo at the Ministry of Foreign Affairs.

Welcoming the visiting Secretary of State, the Foreign Minister emphasized that Pakistan looked forward to building sustainable ties with the United States based on mutual trust and respect.

During the delegation level talks held at the Foreign Office, Secretary Pompeo was accompanied by Chairman Joint Chiefs of Staff General Joseph Dunford and Under Secretary of State for Political Affairs, David Hale. Foreign Minister Qureshi was assisted by the Foreign Secretary and senior officials of the Ministry of Foreign Affairs.

During the discussions, the two sides exchanged views on bilateral and regional issues of mutual interest. Qureshi highlighted that the priority of the new Government was socio-economic development and,for the success of people centered agenda and economic reforms, an enabling regional security environment was imperative. Foreign Minister Qureshi reaffirmed that improving relations with neighbors was a priority.

In the context of Afghanistan, the foreign minister highlighted the latest positive developments on the Pakistan Afghanistan front, including operationalization of the Afghanistan Pakistan Action Plan for Peace and Solidarity (APAPPS).

He reaffirmed Pakistan’s commitment to continue efforts for promoting peace and stability in Afghanistan. The two sides agreed that present conditions in Afghanistan were conducive to intensifying efforts for a political settlement. They underscored the need for the Taliban to seize the opportunity for talks in response to President Ghani’s offer for an unconditional dialogue. 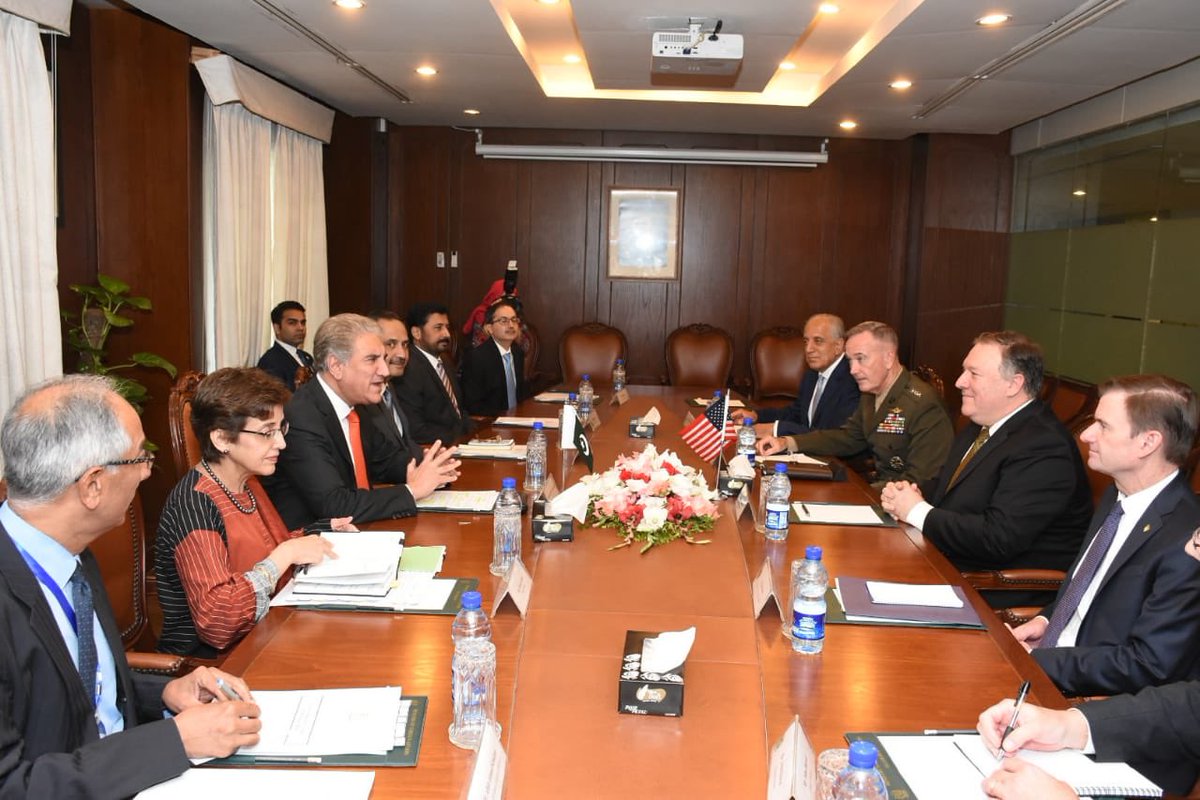 Secretary Pompeo stated that US fully supported the reform agenda of Prime Minister Imran Khan and wished the government success in its implementation. Noting the importance of longstanding Pak-US relationship, Secretary Pompeo conveyed the US desire to work with Pakistan in furthering the shared objectives of peace and stability in Afghanistan.

Additionally, Secretary Pompeo and General Dunford paid a courtesy call on the Prime Minister and held a meeting with the Chief of Army Staff.

Pompeo welcomes Pakistan’s move of sending medical supplies to US