Is this a video of ‘ghost fire’ burning in a graveyard?

A video of fire and mud bursting from the ground has been viewed hundreds of thousands of times in Facebook posts that claim it shows a possible “ghost fire” burning at a cemetery in Ipoh, Malaysia.

The claim is misleading; the footage actually shows a mud volcano erupting in Taiwan. The 23-second video shows fire and mud bursting from the ground.

The caption, translated from simplified Chinese to English, says: “A ghost fire burning at a cemetery? Location: Ipoh.”

Ipoh is a city in northwestern Peninsular Malaysia. 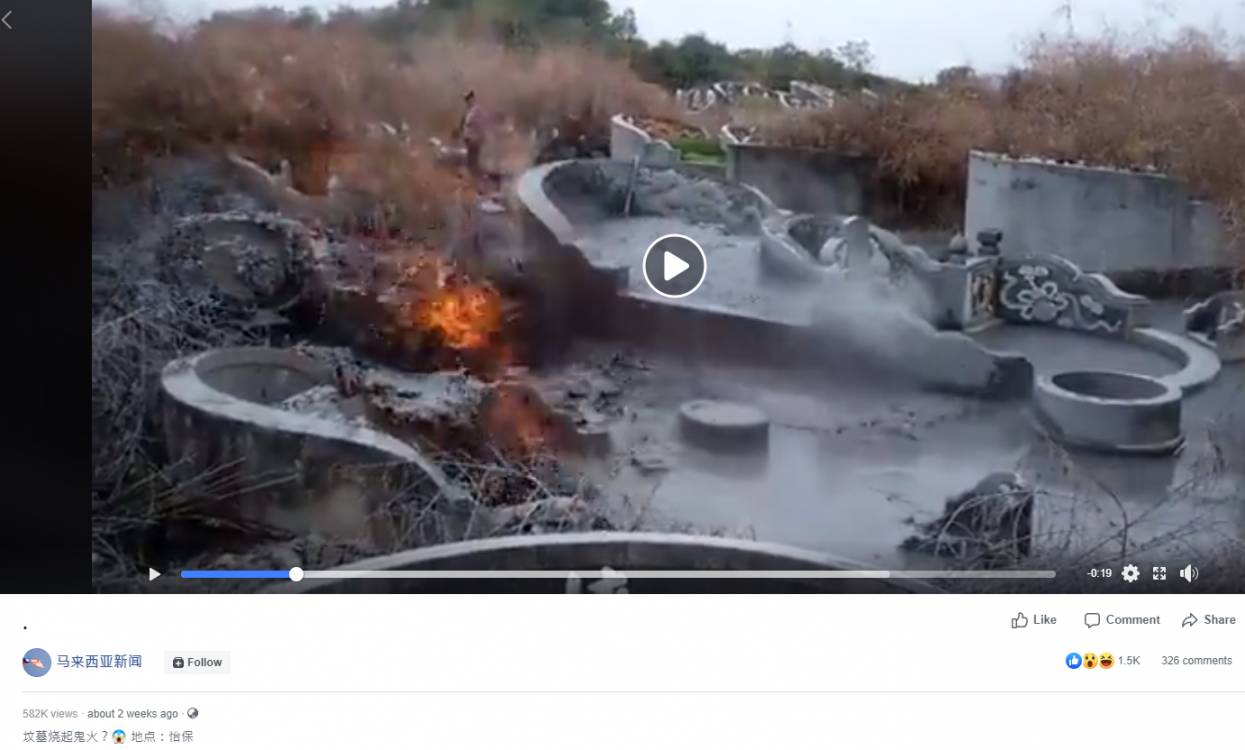 The video was actually taken in Pingtung, the southernmost county in Taiwan.

The clip can be seen from the one-minute and four-second mark of the CNA video posted on January 28, 2015.

The headline of the CNA video translates to English as: “Pingtung mud volcano eruption tears through farms.”

Translated from traditional Chinese to English, the caption states: “A mud volcano at a cemetery in Xinyuan Township, Pingtung County, erupted early this morning.

“The mud flooded the entire cornfield.”

CNA and Taiwanese newspaper The China Times both reported on the eruption of the mud volcano on January 28, 2015.

According to Encyclopedia Britannica, a mud volcano is “mound of mud heaved up through overlying sediments.

“Some mud volcanoes are created by hot-spring activity where large amounts of gas and small amounts of water react chemically with the surrounding rocks and form a boiling mud.”

After viewing the video in the misleading post, Dr Mark Tingay, an associate professor of geology at Australia’s University of Adelaide, said in an email to AFP on September 11, 2019: “The reason why this gas actually ignites is uncertain.

“In some instances, the gas is ignited deliberately by people. However, the gas can also ignite naturally. In some cases, the gas is ignited by a spark that can be produced by rocks ejected from the mud volcano forcefully striking each other. However, it is also possible for the natural gas to spontaneously ignite if a large volume of high pressure gas is suddenly released.

“In summary, this is a natural phenomenon – a mud volcano. Taiwan has many mud volcanoes and the Wandan mud volcano of Pingtung county is a particularly active one that regularly has such large eruptions and is often associated with flames.”

Over 3800 ventilators available in Pakistan