‘Pakistan Ka Mtlab Kya, La Ilaha Illa-Allah’ is the probably the most famous national slogan and almost every Pakistani knows how the slogan became a battle cry for the Muslims of South Asia.

Few, however, know that the slogan was coined by Professor Asghr Sodai, a famous educationist and Urdu poet born in Sialkot city of Punjab.

Her daughter, while speaking to ARY News, reminded and educated all about how her father created the slogan which still rings in the hearts of all the patriotic Pakistanis. 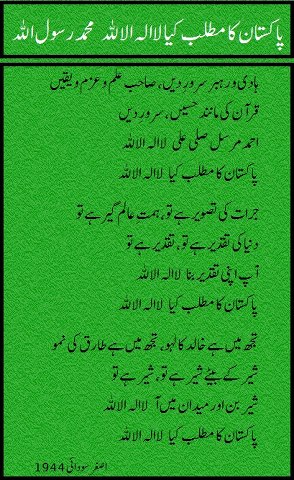 “Whenever we asked him, he used to say that I did not write it, it just came out from nowhere, when I was a kid, my mother used to recite ‘La ILaha Ila Allah’ to me, then when he (Asghar Sodai) was studying in Murray College and was a part of Muslim Students Federation, one day a Hindu boy came to me and said Sodai, you speak a lot about Pakistan, what is the meaning of Pakistan, I replied instantly, Pakistan Ka Mtlb Kya, La Ilaha Ila Allah” said Sodai’s daughter.

Later, Sodai also wrote a poem starting from this famous slogan.   His poem proved to be the most influential piece of poetry ever written for Pakistan and shaped the country’s  ideology.

Here’s the real story behind...