On cemetery tours, the dead come to life

NEW YORK: Keith Bottum blames his inner child when asked why a grown man was spending a recent pre-Halloween evening wandering among the tombs of New York’s Woodlawn Cemetery, the final resting place of famous American celebrities, from jazz great Duke Ellington to one of the most infamous spirits of the silent film era.

“It puts a little thrill in you when you’re walking around at night to see the spooky mausoleums and the headstones,” said Bottum as he toured the ornate burial ground in New York’s Bronx borough. “I’m 35 going on 12.”

Guided excursions through historic graveyards such as Woodlawn, home of the Moonlight Illuminated Mausoleum Tour, have become a hot ticket across the United States around Halloween, celebrated on Oct. 31. The tours are a small slice of what has grown into a multi-billion dollar holiday industry – ranging from food and drinks to costumes and entertainment – designed to excite and amuse adults as much as their children.

On the cemetery circuit, celebrity spirits are the big draw. Beer baron Frederick Pabst lies in Milwaukee’s Forest Home Cemetery, and “Gone With The Wind” author Margaret Mitchell is a highlight of Atlanta’s Oakland Cemetery.

Rich in history and stunning in architectural detail, all three cemeteries are listed on the U.S. National Park Service’s National Register of Historic Places.

Woman’s rights activist Elizabeth Cady Stanton is among the many famous people interred at Woodlawn. But tour guide Nestor Danyluk says perhaps the most intriguing soul who inhabits the graveyard is Olive Thomas – hardly a household name today but a silent film starlet in the early 1900s who was known as “Everybody’s Sweetheart.”

Thomas was a one-time Ziegfeld Follies chorus girl whose ghost is said to haunt the New Amsterdam Theatre, current home of the Broadway musical “Aladdin.”

Thomas was married to actor Jack Pickford and died at age 25 in 1920 after drinking poison at a Paris hotel. It was never determined whether her death was an accident, suicide or murder, said cemetery historian Susan Olsen.

“She’s a very flirtatious ghost,” Danyluk told his audience of 20 at Thomas’ granite mausoleum, adding that her spirit is said to appear at the Broadway theater, where she once danced in shows.

“She loves to sneak up behind men and tug on their shirts or put her hand up their pants legs. If you’re feeling an odd sensation on your calves, it could be Olive,” he said. 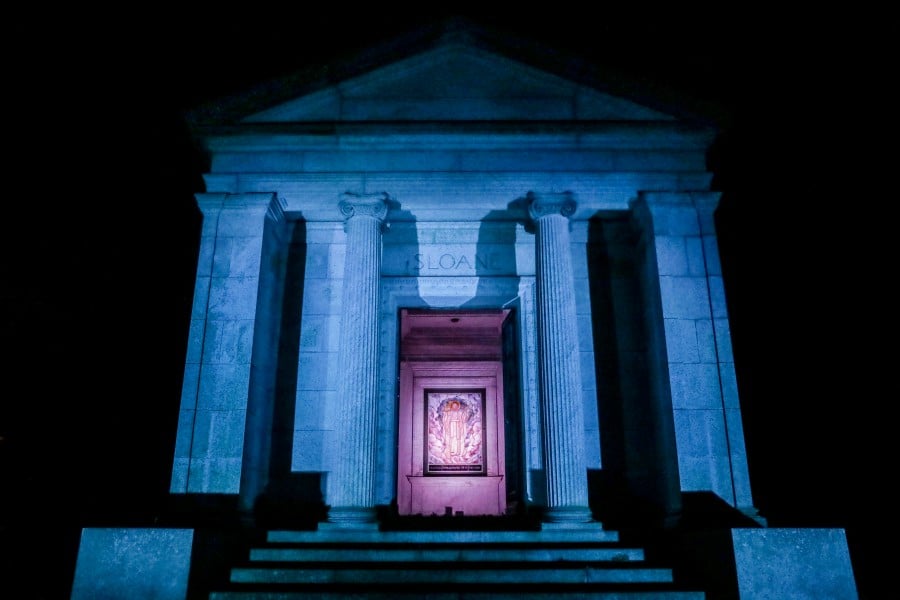 Despite the Halloween trappings, tour organizers say their aim is to share local history and cultivate pride in the community.

“Our tours are designed to enlighten, not frighten,” said marketing manager Angie Wynne in Atlanta, where tickets for “Capturing the Spirit of Oakland Halloween Tours” sold out months ahead, in July.

“It’s not a spooky theme but they act as the various movers and shakers of Milwaukee who are buried there,” Griffith said.

Woodlawn, a 400-acre cemetery in the Bronx that opened during the American Civil War in 1863, is the final resting place for such American legends as Ellington, trumpeter Miles Davis, bandleader Lionel Hampton, songster Irving Berlin and “Moby Dick” author Herman Melville.

It also houses the stately tombs of department store moguls Frank Winfield Woolworth, James Cash Penney Jr. and Macy’s co-owner Isidor Straus. His wife’s refusal to leave his side for a rescue boat during the sinking of the Titanic was a memorable scene in films about the 1912 tragedy.

The Woodlawn tour, which invites guests to bring their own flashlights, has sold out annually since it was first offered in 2016, with more than 250 tickets snapped up this year at about $25 each, said Barbara Selesky, Woodlawn’s marketing director.

On a recent tour, Eugene Zongrone, 75, a retired banker, and his wife Theresa, 71, a retired bookkeeper, gazed at the Tiffany glass windows inside one of many marble and granite crypts that were opened for the tour.