Lord’s Test: Pakistan pile on the agony for England

LONDON: Pakistan again showed England how to play in their own conditions as they maintained their position dominant in the first Test at Lord’s.

The tourists scored 300 runs in Friday’s play, going from an overnight 50 for one to 350 for eight at stumps on the second day of this two-match series.

That left them already 166 runs ahead of England’s meagre first-innings 184, with Pakistan having so far outplayed their hosts in all departments.

A quartet of batsmen made fifties, with England dropping four catches and missing one other obvious chance — a marked contrast to an impressive display by an often-criticised Pakistan slip cordon.

Their had been hopes a return home would boost Joe Root’s men as they looked to recover from series losses in Australia and New Zealand.

But after two days at the ‘home of cricket’, England were struggling to avoid a sixth defeat in eight Tests.

Experienced opener Azhar Ali laid the platform for Pakistan’s reply with a well-made 50 in largely overcast conditions that weren’t easy to bat in.

Asad Shafiq (59) and Babar Azam, who made 68 before retiring hurt, kept the runs coming before Shadab Khan (52) hit his second fifty in three Tests. 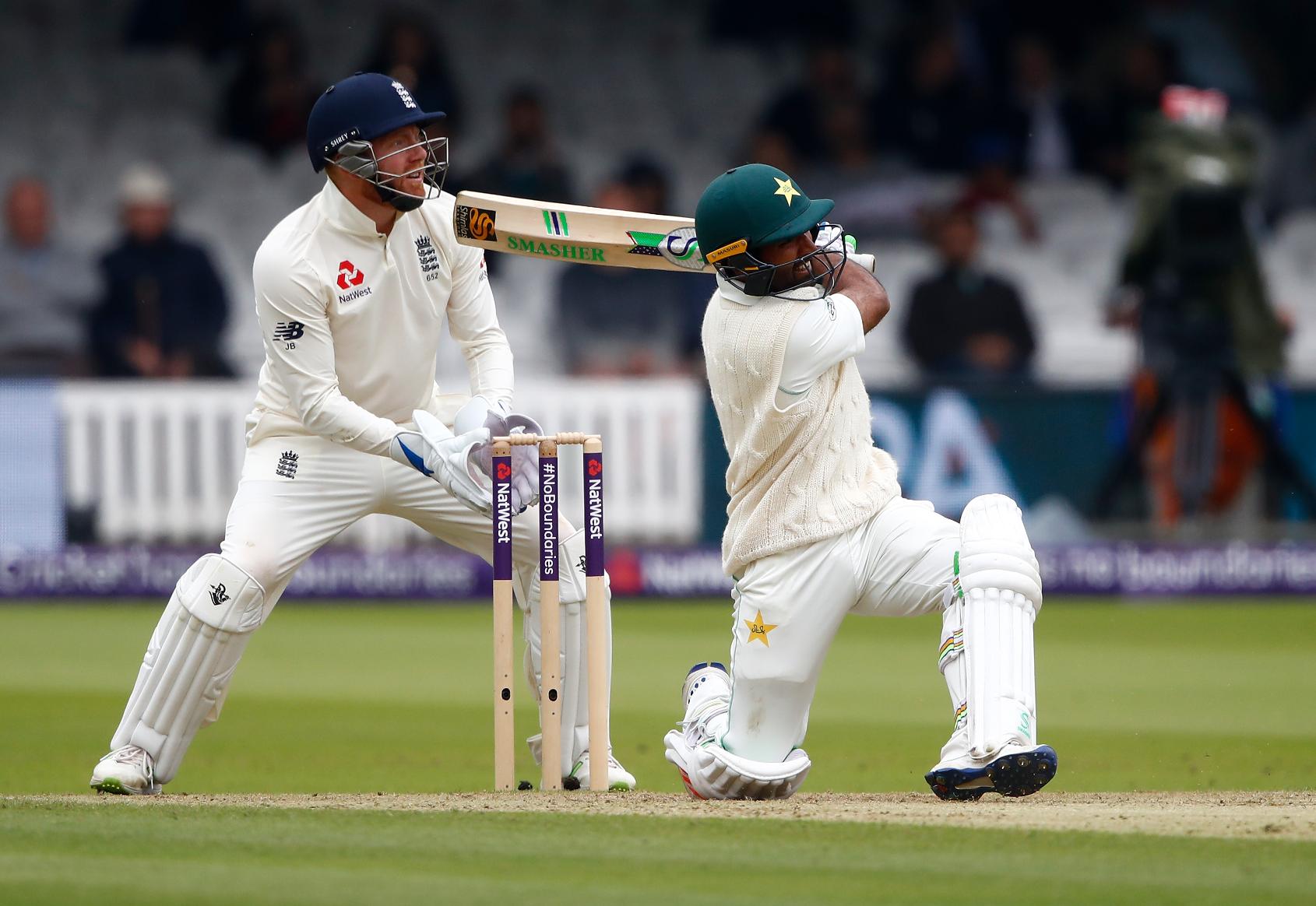 It was a resolute effort that followed on from the disciplined display of Pakistan pacemen Mohammad Abbas and Hasan Ali, who took four wickets apiece on Thursday.

Pakistan resumed Friday with Azhar 18 not out and Haris Sohail 21 not out.

The pair grafted away and picked off the loose balls before fast bowler Mark Wood eventually ended a stand worth 75 runs when, having tried to “rough up” the batsmen from around the wicket, he slipped in a fuller-length delivery that Haris (39) edged to wicket-keeper Jonny Bairstow.

Azhar completed a patient 133-ball fifty but was still on 50 when lbw to James Anderson, England’s all-time leading Test wicket-taker.

Pakistan ended the morning in style as Shafiq hoisted debutant off-spinner Dominic Bess for six over midwicket and at lunch they were 136 for three.

Alastair Cook, in his usual position of first slip, dropped Babar on 10 when he failed to hold a low chance.

Shafiq completed an 81-ball fifty and was then dropped on 59 by a diving Buttler in the gully.

But next ball Shafiq lobbed a Stokes delivery to Dawid Malan in the slips to end a stand of 84.

Babar, whose fifty had come off 93 balls, retired hurt after Stokes struck him on the wrist.

England took the new ball but Shadab and Faheem Ashraf kept the scoreboard ticking over in what was a first match at Lord’s for both of the young all-rounders.

Ashraf though was missed on 29 when he edged Wood between Bairstow and Cook for a catch that belonged the keeper.

Shadab on 30 then presented Cook with a seemingly simple chance off Anderson only for the former skipper to put down the two-handed slip catch.

He completed a 62-ball fifty, including six fours, before a gloved hook off Stokes was well held down the legside by Bairstow in a rare England fielding highlight.

India’s Bumrah ruled out of...

Guinea stripped off Cup of...